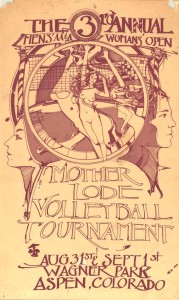 On Labor Day weekend in 1972, Howard Ross and Gordon Whitmer from Newport Beach, Calif., decided to host a volleyball tournament for their friends. The co-owners of the Motherlode Restaurant needed a volleyball “fix.” They set up courts in Wagner Park, brought a keg of beer and a grill, and played. Little did they know that their 14-team tournament would become one of the largest pro-am beach doubles volleyball tournaments in the country.

In the early years of the tournament the bartenders at the restaurant took the registrations; one waiter helped organize it and another waiter was in charge of the T-shirts. By 1981, the Motherlode Volleyball Classic supplanted Boulder’s Colorado Open as the largest event in Colorado. It was getting too big for the restaurant to handle. They hired local volleyball aficionado Leon Fell to handle the event.  The Motherlode now has over 700 teams that come to Aspen to participate and celebrate what Volleyball Magazine called “the social event of the outdoor volleyball season.”

Bests, Firsts & Worsts: Aspen in Objects explores the area’s unique history  told through more than 90 artifacts, each with its own tale that sheds light on the Aspen valley’s bright — and dark — times. The exhibition is open Tuesday through Saturday from 1-5 p.m. at the Wheeler/Stallard Museum, 620 W. Bleeker St.