Two guys from Detroit quit their jobs and move to Aspen to become ski instructors. Quickly, T.J. Burke ascends the ranks as the most popular member of ski school, while Dexter Rutecki stumbles and debates running drugs. T.J. is pursued by the ’90s version of a cougar (Brice) while he actually falls for Aspen’s good-looking radio host, Robin. In between they navigate the nuances of a town that’s juggling its glamorous reputation and struggling working class.

The cult classic ski-bum flick may not be the quintessential Aspen story, but it’s close (and still experienced by some). Here are our five favorite lines, but you can choose your own when it screens Tuesday, Jan. 26 at the Isis Theatre:

The Aspen Historical Society screens “Aspen Extreme” at the Isis Theatre (406 E. Hopkins Ave.) on Tuesday, Jan. 26 at 5:30 p.m. The 1993 movie kicks off the nonprofit’s winter film series. In the following weeks, AHS will present newly digitized ski-focused films from the ‘40s, ‘50s, ‘60s and ‘70s, and then wrap up with “Skiing Everest,” a 2009 film showcasing the mountaineering endeavors of the Marolt brothers, Steve and Mike, fourth-generation Aspenites. Tickets are $10 each, or a season pass is available for $50. 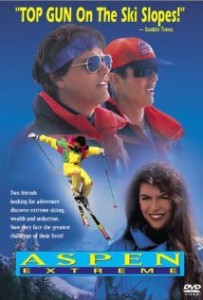