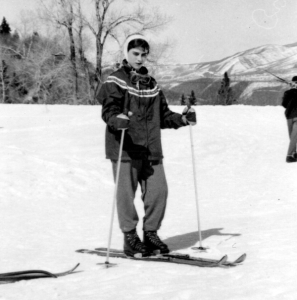 A licensed attorney, Kelly’s deep love of Aspen and the Valley prompted her to leave law practice and join the staff of the Historical Society in 2014. Kelly first moved to Aspen in 1987, after graduating from the University of Michigan. During the ‘80s, Kelly worked at the Paragon, Andre’s, Timberline Bookstore, the James E. Moore pool, and some other Aspen places that no longer exist. She later worked at Aspen Skiing Company in marketing and public relations before attending law school at the University of Colorado. During law school she interned with the U.S. Department of Justice and federal District Court for the District of Colorado. After earning her law degree, Kelly clerked for the Colorado Supreme Court, practiced civil litigation at large and small Denver-based firms, prosecuted criminal cases as a deputy district attorney at the Boulder District Attorney’s office, and prosecuted ethical violations of attorneys as a trial attorney for the Colorado Supreme Court Office of Attorney Regulation Counsel.  She also practiced at an Aspen litigation firm before joining the Historical Society. Kelly was recently appointed by the Colorado Supreme Court to serve on the Bar Committee of the Colorado State Board of Law Examiners. When she’s not having fun at the Historical Society, Kelly loves spending time with her husband and son, and playing outside in our beautiful Valley. 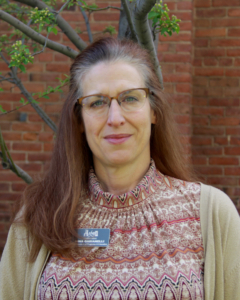 Nina studied theater and music in college and graduated with a BFA in Musical Theatre from Boston Conservatory. Her career with the Aspen Historical Society began in the spring of 2008. Over that past few years, the education and programming department has increased to three full time staff members, four part time docents, and hires eight interns each summer season. The Aspen Historical Society manages two museums, two ghost towns, offers tours all over town and educates children and adults year round. As a Certified Interpretive Guide, through the National Association for Interpretation, Nina and her staff have created dozens of programs and tours for all ages and abilities. Nina is also a Certified Interpretive Guide and Host Trainer. The Aspen Historical Society holds a place of honor and recognition in our little town and Nina proudly represents our community, by training hotel and guide staffs throughout the Aspen area. 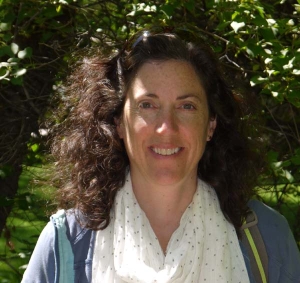 Lisa Hancock, Vice President and Curator, began her museum career in 1990 as the Archivist here at the Aspen Historical Society.  After receiving her BA in Art History from the University of Colorado, Lisa returned to her hometown of Aspen and was able to put her local knowledge to work.  Lisa lives in Aspen with her husband, Jim, and a cat named “Kitty.” Dan joined the staff of Aspen Historical Society in February of 2020 as the Development Director. Dan grew up in upstate New York where he attended and graduated from Siena College while playing on their Division 1 Men’s Basketball team. After graduation, Dan began a journey south to Atlanta, GA, working as Project/Regional Manager in the MIS world. In the mid 90’s he went back for his Masters degree in Theology and went on to work first in Vail, Colorado (5 years) as both a pastor for The Vail Church and as a ski instructor for Vail Ski School; then he “saw the light” and moved on over to Aspen where he had been pastoring since 2005 at Crossroads Church, only a few blocks away. In fall of 2018, Dan stepped back from his pastoral role at Crossroads, where he helped oversee their three million dollar building renovation, among many other things, to launch his tv/film career in Atlanta, GA. Having acted in theater for the last 30 years, just for fun, Dan has been honing his craft in the tv/film industry but wanted his home base to still be Aspen, CO. He is besides himself at the opportunity to reestablish himself in Aspen, teaming with the rest of the talented AHS staff to help take it to the next level, while also hoping to still travel to shoot a few cool shows a year in his free time. He loves to hike, bike, ski and just enjoy this amazing town called, Aspen. 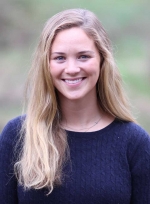 Eliza joined the Aspen Historical Society in 2017 as Marketing Director. Eliza attended Connecticut College where she played on their DIII Women’s Lacrosse team. She graduated Cum Laude with a degree in English Literature and an interdisciplinary certificate from the Goodwin Neiring Center for the Environment in 2008. Eliza has several years experience in non-profit marketing, having worked as the Marketing Director at Aspen Center for Environmental Studies prior to AHS. Eliza’s love for history stems from her childhood in “America’s first resort” – the historic coastal town of Newport, Rhode Island. Eliza and her husband Andrew moved to Aspen from RI in 2008 “for the winter.” Since then, they have become enamored with the Aspen community and the histories and natural environments of the Roaring Fork Valley. Eliza loves traveling, cooking, reading, sports, live music and most of all, exploring the outdoors. Meredith has a BA in History from Lafayette College, Easton, PA, and an MLitt in War Studies from the University of Glasgow, Scotland. A native of Bucks County, Pennsylvania, Meredith has loved studying the past for as long as she can remember. Though her background is in war history and military theory, she worked as a librarian and editor for several years before joining the Aspen Historical Society as an intern and Certified Interpretive Guide in 2019. She joined the staff full time in the autumn of that year, and enjoys all the facets of doing history, from archival research to costumed interpretation. In her free time, Meredith loves reading and writing, traveling, fencing, theatre, singing and playing various instruments, and wandering outside. 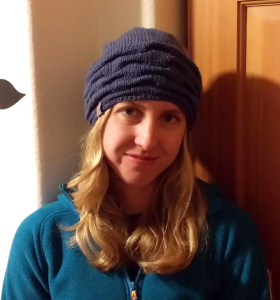 Megan has a BA in History and Fine Arts from the University of Colorado, Boulder.  She was on the Dean’s List all eight semesters at Boulder, and graduated with distinction. Megan joined AHS as an intern in the summer of 2007 and joined the staff in a full time position in the fall of the same year.  She has completed training through the National Association for Interpretation and is now a certified interpretive guide.  In addition, she has taken several online courses in archival practices. 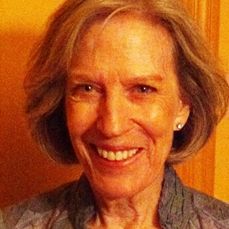 Jane Click wears a lot of hats at the Aspen Historical Society. During the winter, she dons a ski helmet while giving ski history tours at Aspen Highlands. In the summer, she puts on a bonnet for West End Walking tours which explore the neighborhood’s architecture and past. Throughout the rest of the year, she wears a thinking cap as a docent at the Wheeler/Stallard Museum, giving visitors an intimate exhibit experience. She started out nearly a decade ago, volunteering for the Aspen Music Festival & School, and joined AHS “because it’s quite wonderful, and you get to learn about, and tell, the history of this town which is fascinating.” She’s lived in the valley for more than four decades–three of which were spent running her beloved store Geraniums in Sunshine. Her two daughters, Carrie and Cathy, still call the valley home. Jane can often be seen walking her bichon frise, Casper, around town. 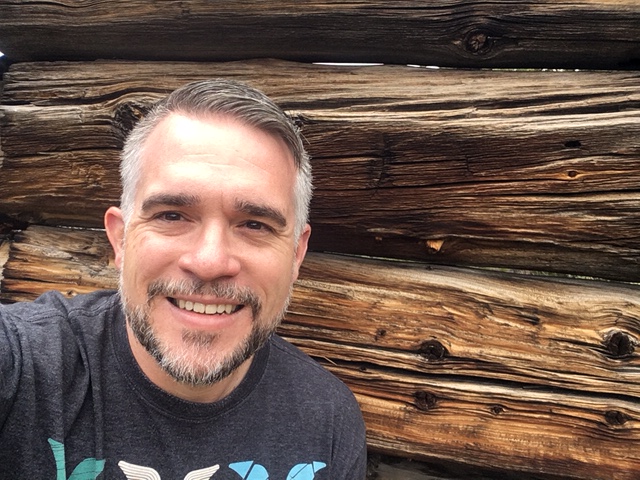 Travis Lane McDiffett has many years of education and performance under his belt.  Starting after college, he successfully taught K-8 vocal/instrumental music but then decided to “do” as well as teach and ventured into the world of professional theatre.  Over the past 12 years he has appeared in various venues around the country, most notoriously as a member of The Crystal Palace Theatre Restaurant from 2002 until its demise in 2008.  Although he left for a time the draw of Aspen was inexorable, and in the summer of 2014 he returned first as an intern then transitioned into his current position.  He is excited to be using his education credentials again, as well as for the opportunity to put on his hiking boots, get onto his snowboard and rejoin the wonderful local theatre scene. Mike is a Colorado native who first ski-bummed in Aspen in 1979. He has BA in Speech and Drama with a Minor in Music from Occidental College, Los Angeles, and has many years’ experience in theater and television, as well as a life-long love affair with museums and history.  He came to work at the Aspen Historical Society from the venerable Crystal Palace after the theater-restaurant shut its doors in 2008, and was one of the “Aspen Today” hosts on Channel 16. His play, “A Briefly Complete History of Aspen”, performed by three actors in 45 minutes, has been performed up and down the valley, as well as at Museum conferences from LA to Lincoln, and you can often find him behind the wheel of “The History Coach”, the electric tour vehicle which belongs to AHS. In his spare time, he writes, directs, and performs with many of the local theater companies in the valley. 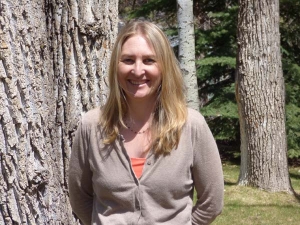 BA in Anthropology/Archaeology, Western Washington University, WA.  Internship at the Whatcom Museum Photo Archives. Employed as an Archaeologist with the BLM in Cottonwood, Idaho- for the Lower Salmon River District in 2000 & ‘01.  Worked as an archaeologist for consulting companies In the Northwest and Colorado, graduated from the Roaring Fork Leadership program in 2007, is a certified interpretive guide for NAI, manages the preservation projects at both ghost town sites and has continued with education courses in archival practices and emergency planning for cultural resources.