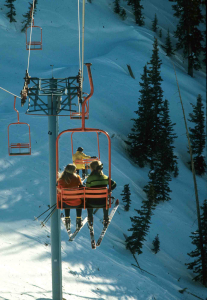 Can you name the year and location of this photo? Show off your skills and send us the right answer and the first correct respondent will receive two passes to any tour of your choice (History Coach, West End Walking Tour, Historic Bike Tour or Hotel Jerome). Send your suggestions to archives@aspenhistory.org. (You can click on the photo to make it larger).

Last month’s winner was Buzz Cooper, who correctly identified the following as being near the ghost town of Independence. 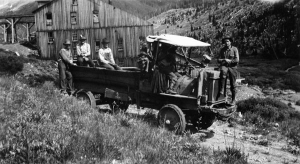 For the fifth consecutive year, Community First Foundation and FirstBank are partnering to present Colorado Gives Day. All Coloradans are encouraged to join the statewide movement on Tuesday, Dec. 9, 2014, by supporting their favorite causes online through ColoradoGives.org.

Colorado Gives Day is powered by ColoradoGives.org, a year-round website featuring nearly 1,500 nonprofits. ColoradoGives.org encourages charitable giving by providing comprehensive, objective and up-to-date information about Colorado nonprofits. It is an easy way to support us online! 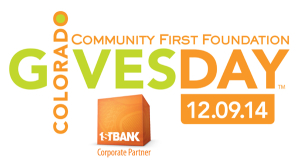 It’s not too early to start planning for holiday gifts, especially when it means finding the perfect Aspen image. Did you know you can search our online database by keyword and find more than 10,000 iconic Roaring Fork Valley photos? Once you find that perfect image, it’s easy to make it yours and give the gift of Aspen.

Plus shipping and/or taxes

More sizes available upon request. Some images may need to be cropped. 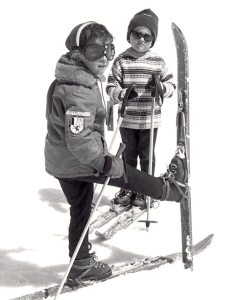 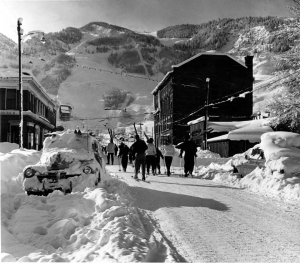 The snow is falling and organizers are prepping for World Cups races, which return to Aspen over Thanksgiving weekend. Aspen is also proud to announce it will host the World Cup finals in 2017. So as we look forward to upcoming events, first take a look back.

A press release for this image reads “In a spectacular display of color, top seeded Italian racer Daniel Mair launches himself from the start of the 1986 Subaru Aspen Winternational Downhill.” Unfortunately, there is no Italian ski racer named ‘Daniel Mair’ but there is one named Micheal Mair. There was also a Swiss ski racer named ‘Daniel Mahrer’- which likely added to the name confusion. Whatever his correct name, his skin-suit tells us this racer is definitely Italian. The start banner was donated by the Aspen Winter Club in 1992.

1941 – Aspen hosted the US National Championships DH and SL (GS and Super G were not created yet) Winners were Toni Matt and Gretchen Fraser.

1950 – Aspen hosts the FIS World Championships, the first time this event was ever held outside Europe, thanks to the efforts of Dick Durrance who also invented the Dipsy Doodle ski technic and for which Dipsy Doodle is named.  The Aspen Ski Company and Aspen Ski Club were also instrumental in bring the event to Aspen.  Overall winners were Italian Zeno Colo and Austrian Dagmar Rom.

1954 – The Roch Cup races, which were also the National Championships, were won by Chiharu Igaya, a Japanese student from Dartmouth, who went on the win the silver medal in the 1956 Cortina Olympics.

1959 – Aspen again hosted the Roch Cup races which doubled as the National Championship.

1960 – According to a Feb. 5, 1960 Aspen Times article, Roch Cup race officials expected the largest field since the 1950 FIS World Championships as European competitors made the trip to the US before the Squaw Valley Olympics.

1963 – American Billy Kidd won the Roch Cup DH and SL before being named to represent the US at the 1964 Innsbruck Olympics where he took home the silver medal in the SL.  The Roch Cup races were “tryouts” for the Olympic team.

1976 – After winning the downhill at the 1976 Innsbruck Olympics with the most famous run in downhill history, Franz Klammer won Aspen’s downhill.

1979 – Aspen hosted a women’s only GS with Christa Kinshofer taking home the gold.

1981 – This race marked the beginning of the Winternational event, a week-long celebration of skiing.  American Tamara McKinney nabbed first place in the GS as well as the World Cup GS title.  Phil Mahre, also from the US Ski Team, won the GS, on his way to winning his first World Cup Overall title, narrowly edging Swede Ingemar Stenmark by only 6 points to capture his first title in 1981.

1989 – Ingemar Stenmark, the winningest racer of all time with 86 World Cup victories, won his final race in Aspen.  Men’s World Cup racing returned to Aspen and races were held every year (except 1990) through 1995.  Winners during this period were ski racing greats such as Alberto Tomba, Kjetil Andre Aamodt, and Fredrik Nyberg.

1998 – World Cup racing returned to Aspen after a three-year hiatus with a men’s Super G and SL.  The Super G course was slightly altered to take advantage of the early-season snow.  Racers dubbed it one of the most challenging Super G courses in the world.

(2001) – Aspen was awarded 5 events but only hosted two men’s slaloms that year.

2001 – Croatia’s Ivica Kostelic, following in his sister’s footsteps from the previous year, unexpectedly won the SL starting from the 64th position for his first World Cup win.  In the second race, Austrian Mario Matt won over Bode Miller, who achieved his first World Cup podium and was the first American male to be on a SL podium in 14 years.

2002 – The Women’s World Cup began its annual trek to Aspen, except 2003 and 2013, when the races were given to other resorts in order for them to run test races for the World Championships.

2004 – Fin Tanja Poutiainen wins two of the three events, a SL and GS, with Swede Anja Paerson taking the top result in the other SL.

2006 – Austria’s Kathrin Zettel achieves her first World Cup victory in the GS.  Zettel returned to the top of the podium six years later in Aspen’s 2012 SL.